Reviewed by Patrick F. Durgin, The School of the Art Institute of Chicago

David Ray Vance's Del Sol Press Poetry Prize winning book Vitreous seems to take a signal of permission, if not an organizing principle, from the U.S. modernist poet Louis Zukofksy. Zukofsky's literary essay "An Objective" outlines the primary tenets of Objectivism, a short-lived movement emerging from a special issue of Poetry magazine in 1931, then still a launching pad for radical modernists like Ezra Pound and William Carlos Williams. Zukofsky's essay concerns the elusive representation of "vital 'particulars,'" whether "a new object [or] the stripping of an old to the light" (Zukofsky 12). By vital he means lived; but living in particular: "a personal structure of relations might be a definite object, or vice versa" (13). That reversal objectifies experience in a poetic form characterized by truth in the materials of the poem—language. Zukofsky calls this "sincerity"; in its original draft, the essay was called "Sincerity and Objectification." Personal relations and linguistic particulars he saw as mutually enlivening, marking difference in the actual sound and sense of an encounter with the poem. The operative figure here is an ocular trope which favors opacity over transparency: "Strabismus may be a topic of interest between two strabismics; those who see straight look away" (12). For Zukofsky, as for Vance, the truth is not given in the materials, not taken for granted. Rather, a poetics of objectification is what is required. For the ongoing interrogation of literary representations of disability, what I like to imagine is the gradual and cacophonous assembling of a post-ableist poetics, Vitreous offers a lucid circuit of critical objects, though Vance's "subject" is rarely overtly the issues in question: visibility/passing, blindness as a literary trope, the medical gaze, dependency. In its way, this collection of poems makes us "two" who "look away." The actual subject of the poems is varied, yet always refracted through the lens of what historian Martin Jay calls "visuality": "The cultural variability of ocular experience" (Jay 9). Central to this collection is the fact that sightedness is as cultural a variable as it is a biological one. A disability reading of Vitreous may be only a matter of deploying tropes of visibility to comprehend the horizons of lyric witness. Especially through its evocation of Objectivist poetics, it invites us to do so. "Misdirection means purposeful direction" (Vance 38).

The book's terrain is not exactly cultural or biological. Instead, it questions the epistemological assumptions that mediate them. A primary question this book toys with is: What can we claim to know about the autonomy of our own lived experience of impairment if impairment is indeed an a priori category of disability? "The Eye The Beholder" is exemplary; in a set of interleaved columns of text (a favored form throughout), phrases gain a recursiveness that deeply ironizes a play of gazes: medical and personal.

Is it from within the vital particulars of "the opaque…a singularity" in which a putative "good one" flickers, staring back at the "process" of medical surveillance, that we lose "perspective"? Or is the furtive indeterminacy of the interdependent players of this drama—their position as entangled and ostensibly differentiated subjects—a form of passing, one for the other? Vance's philosophical triage allows them to pass into one another, invariably historicized in the event of depending one (object) on another (subject). Passing for normal stems from a desire to be nowhere, merely a reference, a scientific ideal. The possible trajectory of desire under the medical gaze this poem dramatizes runs from vanishing point (specimen) to utter loss of perspective (fantasy).

The book is divided into sequences or chapters set off by illustrations and epigraphs culled from antiquated scientific and metaphysical texts: for example, gracious woodcuts depicting monstrous optometric gadgets; a tantalizing infobyte (by Harvard mathematician Robert Kaplan) regarding the status of "the zero…the variable, the unknown"; even a Snellen chart, used to quantify visual acuity, with an embedded utterance ("IF YOU ARE A READER READY EAGER AWARE BEWARE"). This warning echoes the epistemological stakes, which had been set high from the outset, as, for instance, in this image and caption from the initial page of the book. 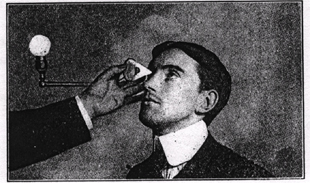 Our insides…are a planet more distant, far less familiar to our gaze. We can't use a familiar photographic translation of image to the world, but have to work through a further code. And it is this further distancing (which may be the result of the technology of the imaging devices) which seems to be an accurate and appropriate way of elucidating our relationships with our bodies.

Despite a sense of unease so vividly conveyed by the disembodied hand setting a sharp and sinister instrument before the opened eye of the patient, Kentridge's metaphor provides a form through which to suffer the paradox of this "further code" with relative impunity. Readers might begin by asking whether, using the anatomy of sight as a vehicle, Vance is able to question the ableist tropes of visibility and impairment, the integrity of human bodies normalized under emotional and ideological regimes? That's the real question this book poses, and not whether, as Mary Jo Bang puts it in her back cover blurb, "[received verse] form[s can] be further broken and still be a poem." Much of disability culture poetry has concerned itself with reshaping the templates, through crip form and content, available for the emotional, intellectual, and perhaps spiritual work that poetry facilitates. "[E]lucidating our relationships with our bodies" calls for complicated poetic measures, of course. A kind of craftsperson of his own observation, Vance suggests that the known quantity is the quality of that awareness, its "sincerity" in Zukofsky's sense of that term, no matter what the medical chart might say. In contrast to the regal "objectivity" of Vance's intertexts, we are invited to read the subsequent poems as inscapes, personal and personable epiphanies relying on an inviolable "still center" of the lyric self (Ferris). But the inscrutability of "our insides" is, of course, mocked in the delicious and not-so-vaguely imperial fantasies of Martian missions or Placido's disc. Vance has too rich a sense of humor to be beholden to populist, lyric epiphanies, although his intertextuality does cast a scholarly patina over the book.

But having brought otherwise ableist tropes of visibility onto his side, Vance's tone becomes remarkably sober, often somber. As in the book's second poem, "On the Farthest Limits of Scrutiny":

Yet Vance more often devises observations than critiques; his poetry isolates and validates critical questions, though it offers few answers and sounds no protests. For example, "Familiar Bodies" is a love poem set in fond remembrance of a fugitive, perhaps unintentional caress in a museum.

Later, in the sixth of fourteen "Recantos," Vance offers an "Observed Ritual," imagining an intrepid traveler caught between the pages of Gray's Anatomy, his "vitreous body" bifurcated just so. But he is everywhere queasy with that awareness. A kind of vertigo takes hold in that dizzying asymmetry of the lyric self, itself observed indifferently, mechanically.

Vitreous concerns what today we call "visual culture" by letting it seem both instrumental and entirely relative to any present concern, hence the pun on "virtuous." The pun allows the poems collected under its auspices to be most readily sifted into the structure of enlightenment subjectivity wherein sight is equated with percipience, and percipience is equated with discernment, a variation on and extension of the classical trope of the poetic moment conducted by the seer. Yet the poems themselves present a peculiar amalgamation of recent American poetic schools associated with profound critiques of the seer's mystique, usually by way of a more legibly mundane and social version of "the" poetic voice. Vance deftly receives and collages familiar verse forms emerging in the United States since the domestication of the high modernist verse that typically concludes core curricula. Nonetheless, the "voice" here, in for instance "Theory of the Opthalmoscope," a poem of alternating blank verse tercets and couplets, is saturated with coy, self-consciously "poetic" sentence fragments like "Resembles shimmer of watered silk[,]" closing with a signal evocation: "Experience is necessary to avoid judging / common variations pathological" (73). In the series of "Injuries" that follow "Theory…" and comprise the rest of the section, there is an attempt to deploy this experiential (in the broadest sense of the term aesthetic) imperative. Finally, in a scenario Zukofsky would have appreciated, it is down to the reader to practice a poetics that would disrupt ableist motifs of visuality.