Staring Back and Forth: The Photographs of Kevin Connolly Ann Millett E-mail: millett@email.unc.edu

Kevin Connolly, who was born without legs, photographs people staring at him around the world. The photographs represent staring as a multi-cultural and multi-generation act. In this paper, I discuss the phenomena of staring in art and everyday life, from perspectives of art history and disability studies, in relationship to Connolly's photographs. I argue that Connelly's photographs reveal an embodied perspective and subject position of disability through staring back.

Looking immediately activates desire, possession, violence, displeasure, pain, force, ambition, power, obligation, gratitude, longing … there seems to be no end to what seeing is, to how it is tangled with living and acting. But there is no such thing as just looking." 1 - James Elkins

"Photography mediates between the viewer and the viewed by authorizing staring."2 - Rosemarie Garland-Thomson

If seeing is believing, then staring is worship, terror, or at the very least, personal investment. According to art historian James Elkins, seeing is never innocent, disinterested, or without consequences; rather, the above quote exemplifies that seeing is emotionally dense and multi-faceted. Staring, according to Elkins, is an extra-intense form of seeing, and it is always reciprocated. The object stares back; the gaze/stare is 2-directional with animate and inanimate objects. Elkins maintains that all staring, like other forms of seeing, is partial, unwhole, and involves loss, and we are oblivious to the limits of our sight.

Disability studies theorist Rosemarie-Garland Thomson also recognizes the ideologies embodied in staring, which is a social interaction visually disabled individuals share and are forced to confront.3 Garland-Thomson discusses the existence of disability as spectacle and argues that disabled people are inherently on social display. The social stare articulates and legitimizes disability as difference and disempowerment, for Garland-Thomson, marking the disabled subject as abnormal or subnormal; staring choreographs a safe distance between disabled starees and non-disabled starers, psychologically, socially, and politically. According to Garland-Thomson, it enacts disabled subjects' social isolation, rejection, and subjugation. Staring is ultimately an act that exercises power and discrimination. Specifically, Garland-Thomson focuses on photography as a medium that provides the opportunity for non-disabled subjects to stare at disability without the possible exchanges of one-on-one contact. Analyzing medical photography, popular photography (from charity campaigns, advertising, and the freak show), and official portraits of public officials, Garland-Thomson argues that photographs invite and sanction the stare.

Kevin Connolly, who was born without legs (called sporadic birth defect), has taken about 32,000 photographs of people staring at him, assembled as The Rolling Exhibition.4 Connolly's photographs are about staring, which Garland-Thomson sees as inherent in photography of disabled people, but he is behind the camera. "You know, if I see someone that doesn't look, you know, looks particularly strange on the street I'm gonna stare," Connolly said. "I'm not above that by any means."5 Connolly, with his camera, stares and stares back. Those who stare at him become the subjects, caught in their acts, captured on film. Connolly, a senior at Montana State University, an X-Games medalist, and an extreme skier, has traveled the world, getting around cities on a skateboard, which he prefers to a wheelchair, and wearing his boot, a leather seat with a rubber sole which resembles a large slipper and which he calls "moccasin pants."6 His images come from the Pacific Rim, Asia, Bosnia, New Zealand, and throughout Europe. The portraits prove that staring is a multi-cultural phenomena and act and that starers come from all ethnicities and all walks of life. Being stared at and being photographed because of his unique body inspired Connolly to make his own photographs and to document the experience of staring, from the receiving end. The stare embodies viewer's questions and assumptions, which the photographs elicit in their subjects' returned, puzzled gazes. "People are curious," says Connolly, who says that people all over the world invent stories about him, where he came from, and what he's doing.7 People tend to invent and share their own narratives about him. While traveling, Connolly has been mistaken for a holy man, a member of a carnival act and an Iraq War veteran. The stare embodies questions Connolly receives, such as "Was it disease?," " Was it a birth defect?," "Was it a landmine?"8 Ultimately, as Garland-Thomson states, the stare is an act of power, and Connolly uses this power to make photographs.

Connolly's photographs initiate and document unique social interactions that occur through staring at disability. "My first step in every city is seeing how different cultures react to my condition. It always sparks an interesting dialogue with the locals. … And sometimes their curiosity can generate a full-on conversation."9 These interactions take all forms, from rude questions, to assumptions, to praise, and they affect the starer and the staree. Garland-Thomson states: "Those of us with disabilities are supplicants and minstrels, striving to create valued representations of ourselves in relation to the nondisabled majority."10 Here, Garland-Thomson suggests how visibly disabled people become social performers. Starers are also affected, as Elkins explains: "Pictures of the body elicit thought about the body, and they can also provoke physical reactions in my body."11 Elkins professes that nothing is more "affecting," "nothing more puzzling," and "more potentially incomprehensible" as images of the body.12 Further, Elkins maintains that no matter what object we stare at, we envision it as a body; that we see body metaphors and echoes in abstract and representational images.13 The gaze/stare is inevitably embodied and transforming to subjects on both sides of it. It can evoke empathy, loathing, and self-questioning. Images of the body are powerful and dominant, and Connolly's photographs interrogate human nature and explore the significances of daily human encounters. 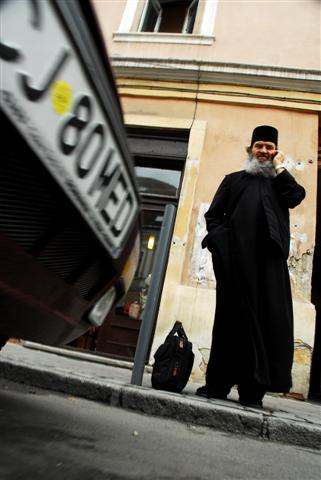 In Connolly's photographs, the stare marks collisions of cultures, time periods, and bodies. The image, Man; Cluj Napoca, Romania (2007), features a Romanian man with a long beard who wears full-length black robes. His Old World hairstyle and dress contrast with his actions as talks on cell phone. The photograph seems to span multiple contexts. The camera's lowered perspective and viewing angle upward reveals Connolly's perspective and appears to come from under a passing car, whose license plate we see blown up, blurry, and angled sharply in the left frame. The man is distracted from his activities by this object of his intense stare. 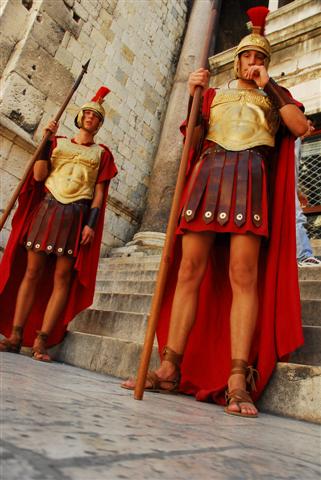 In Two Men; Split, Croatia (2007), two men in uniform appear standing, apparently on guard despite their passive demeanors. They wear the costume of ancient Roman warriors and both stare into the viewer's space, while one man covers his mouth as if protecting himself from infection. The image confuses positions of performer and spectator, as the guards would stand out in contemporary city streets and attract stares. The photograph questions whom is on display and why. 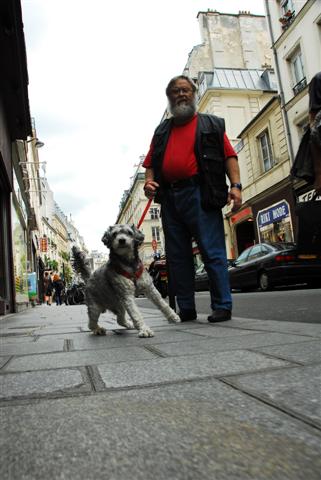 Man and Dog; Paris, France (2007), exhibits a man and has dog, both staring in interest or alarm, with looks of excitement mixed with surprise. The standing man holding the leash looks apprehensive or curious; his facial expression, of eyebrows raised and mouth open, is one of self-conscious disbelief. His dog, by contrast, cannot mask his reactions and jerks away from his owner in a heightened state of arousal. The height of dog equals to the height of camera and the photographer's gaze, such that the photographic perspective is more interactive with the alarmed pose of dog than his owner. 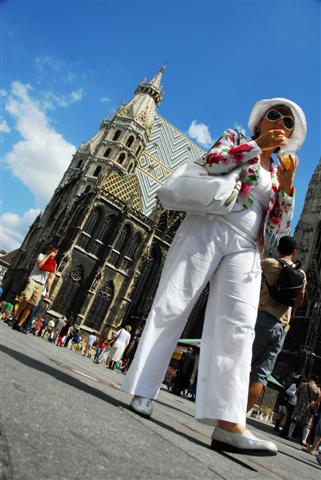 Whereas, in Women; Vienna, Austria (2007), a woman is caught in her surprised ogling of Connolly. She is shot mid-stride, her mouth opened to ingest food we imagine she has purchased from a street vender. Dressed in light, casual white pants, patterned jacket, and sun hat, she moves away from an angled building in the background of traditional Viennese architecture, which may be a church or public forum, but resembles a gingerbread house. Strong diagonals in the composition enhance her seemingly rushed movements. She is distracted from her journey by the photographer below, whom she stares at through plastic and bright-colored sunglasses that mask her eyes (the windows to the soul). 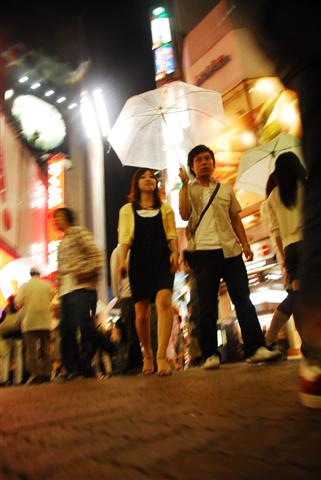 Finally, Woman and Man; Kuala Lampur, Malaysia (2007) features an advertising mural, which dwarfs a man who stands in front it, as the photographer is dwarfed by the overwhelming environment. The contrast in size and the confrontational image of a recognizable American model/actress again questions what is on display in contemporary culture. The composition represents the visual nature of life and the voyeurism inherent in city scenes, as the standing man stares at the cameraman.

Kevin Connolly was featured on the January 4, 2008 episode of ABC's 20/20 and his photographs have been shown in multiple shows at Montana State University, can be found on his website (http://therollingexhibition.com/), and are on permanent display in the pub of the Plus Prague Hostel in Prague 7. The images exhibit disability as a way of seeing from an embodied, indeed empowered, perspective. In an introduction to an anthology of fiction, nonfiction, poetry, and theatrical scripts by disabled authors, Kenny Fries states: "Throughout history, people with disabilities have been stared at. Now, here in these pages — in literature of inventive form, at time harrowingly funny, at times provocatively wise — writers with disabilities affirm our lives by putting the world on notice that we are staring back."14 For Fries, staring back is a metaphor for expressing firsthand the experience of living with a disability. Many visibly disabled writers in the anthology discuss hiding from and being forced to confront voyeuristic stares, questions about their bodies, and assumptions about their lives and their bodies. In "Pony Party," an excerpt from Lucy Grealy's autobiography15 of a childhood cancer survivor, who had disfiguring facial surgery to remove the cancer, Grealy tells the story of when, as a teenager, she worked for a local horse stable at children's parties and confronted a persistent stare. Grealy writes: "But with each circle, each new child lifted into the tiny saddle, I became more and more uncomfortable, and with each circuit my head dropped just a little bit further in shame. With time I became adept at handling the horses, and even more adept at avoiding the direct stares of children."16 Grealy expresses becoming self-conscious from stares and questions about her "disfigured" face, perhaps most blatantly from children. In relationship, Connolly's website includes numerous images of children staring, such as: Boy; Split, Croatia; Boy; Sighisoara, Romania; Girl; London, England; Boy and Girl; Zurich, Switzerland; Man and Girl; Reykjavik, Iceland; Man and Two Children; Cluj Napoca, Romania. Together, these examples express being stared at as a common experience for disabled subjects. Connolly's collection of works exhibits an aspect of disability subjectivity. As exemplified in the photographs, the disabled gaze is staring back.